It has been a long time since my last update, mostly for health reasons. Without giving to much detail, you can imagine things are pretty awful when you can't even find enough energy to look at a miniature! However, I'm now on the mend and ready to get a few projects underway: a few commissions for terrain and some sculpting. For my self, I was able to set aside some energy to finish painting a few figures and, after a long wait, Romina and I finally got a game of Flintloque underway.

A couple of weeks ago we made preparations but didn't get much farther than that, which Gavin from Alternative Armies turned into a brilliant post about setting up for play. You can see some more of it here.

What follows is a report of the skirmish between the proud forces of the Free State of Schnöselberg, dubiously led by Rittmeister Heißhund, and the Ferach infiltrators lead by the devious, duplicitous and downright dangerous Captain Couteau. 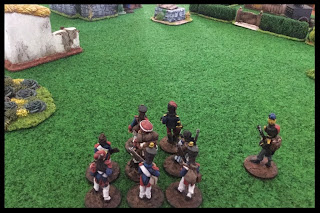 The Ferach forces prepare to march on the Red Dragon!

The first stop on the Schnöselberg scenic tour is the lovely, rustic Red Dragon Inne - a popular watering hole for the locals and soldiers who pass through. Close by is the renowned chocolatier and master coffee roaster Herr Tobleron. At the centre of the town lies a well. This is the main objective of the scuffle, and needs to be captured by the end of combat.

Buildings lying around the town are also able to be captured, but this is a secondary goal - and quite dangerous! When entering a building, a character must roll a d6: 1 - 2 - The soldier easily makes his way inside, only to be knocked out by surprise! (lasts two turns); 3 - 4 - The door is locked, getting in will be tough; 5 - 6 - The soldier easily makes his way in!

Supplies are always needed, so grab that pig - if you can! Approaching within 5cm of the pig will startle it at 50%. If startled, it will move 3d6 in a random direction. Otherwise it will need to be led away.

Lastly, that pesky journalist Fritz Heulen is on the prowl for a good story - this might prove to your advantage! Have him in your possession by the end of the battle. However, an opposed melee roll will be required to stop him snooping around for his latest story. Otherwise, he moves 3d6 in a random direction.

Sneaking a visit to the house of Herr Tobleron is almost irresistible as the smell of roasting coffee beans and other tasty treats wafts over the battlefield. Roll a d6 at the start of the game: the result is the number of cups of coffee he is able to brew. Imbibing a cup will give you an extra move action next turn. No fighting in the yard, though. There's a good boy!

Oh... and be careful: the townsfolk haven't taken too kindly to the recent visitors. The Innkeeper is happy to take things into his own hands and there is a 50% chance he may appear at the start of a turn and blast at a random soldier with his musket! His wife, however, is rather interested in these fine specimens and they know it! They ignore Shaken results if in melee within 15cm of the Innkeeper's wife. 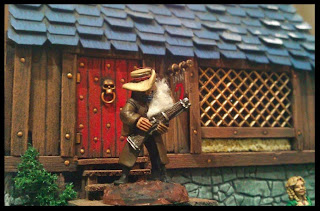 Get off my lawn.

Well, well, well...
The Battle at the Red Dragon Inn
as told by Herr Fritz Heulen
in a letter to his cousin, the esteemed
Herr Gunther Heulen Esq.

It has been so long since we have spoken. My travels have taken me to the hot-bed of intrigue and skulduggery that is the Free State of Schnöselberg – and you all said it was a backwater! My latest adventures have landed me in a spot of trouble, but more on that later.


Be sure to pass on the following account of a recent clash for the key strategic point, the Red Dragon Inn… more importantly the well at the centre of the hamlet. Make no mistake - this could turn the tide of the war!

It was early on in the battle that I was whisked away by a Ferach soldier who, as he approached, brought with him a stench of alcohol that made my eyes water. He staggered over followed by a decorated superior. Unfortunately, he was well and truly legless a short while later: I barely heard the pop of the Ostarian Air Rifle that felled him. I never found out what happened to him after the battle but I seem to recall him getting dragged away by an angry mob of villagers... 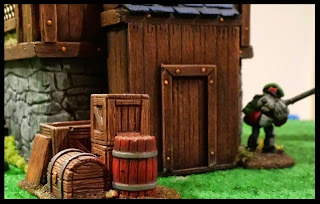 The Jaeger von Meister sneaks around the back of the inn... 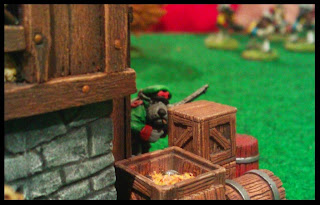 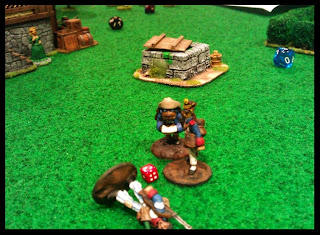 Seeing that I was in danger the Ferach lieutenant attempted to lead me away to safety as the distinct crack of musket fire could be heard in the distance. The struggle for the well had begun!

I must admit that in the confusion I could make out few details. However I do seem to recall being passed on to several other soldiers before the battle was finished - so considerate! Even now the Ferach have taken precautions to set an armed guard outside my tent for my protection.

The elves quite deftly maneuvered their way to a good vantage point, intercepting the lone dogman that held the well. With a decisive order from their Leader, the small section of troops let rip from their muskets and felled the poor pup where he stood! 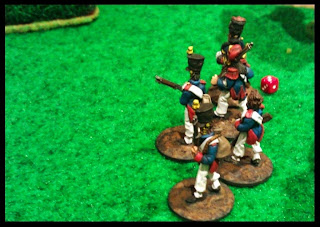 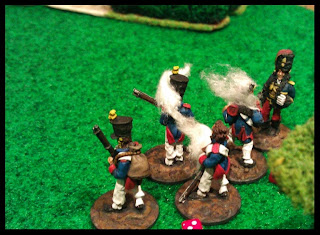 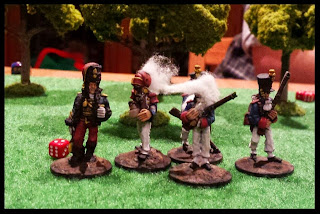 The whole affair was very civil for the most part: I seem to recall two soldiers from opposing sides taking time to have a coffee break part way through the battle. I quite like the idea of a soldierin' life, and have often wished to take up the uniform of my native land, see the world... if only my health would permit. 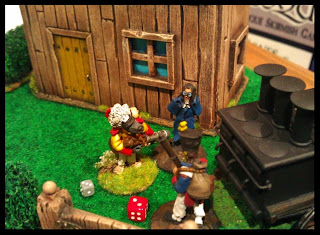 Two soldiers take a moment to sample Herr Tobleron's finest brew...
and benefit from a quick burst of energy in the next turn! 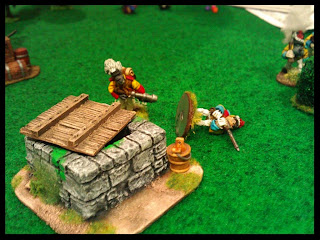 The supercharged Schnöselberg grenadier takes the initiative and makes a grab for the well... can the puppies hold it? 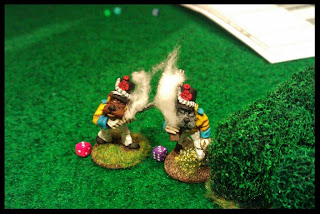 In a last ditch attempt at the well, the Ferach troops closed in to hand to hand combat. Lowering their bayonets and sounding the charge, they rushed in... however, they did not reckon with the good breeding of Musketier Sprungsteen, or "Knuckles" as he is known to his peers! He felled two Ferach elves with one almighty right hook. It would have done his litter proud. 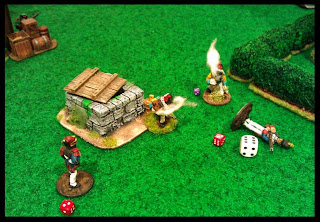 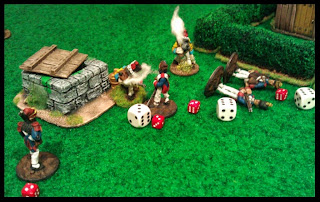 Knuckles gives the Ferach more than they bargained for... his pal von Schnussel does the same!

At this it seemed that Cpt. Couteau of the Ferach elves used his better judgment and sounded the retreat, after passing through the hands of what seemed all the nations of Valon it was time to leave the battlefield - but not before a last, desperate attempt by the young Schnöselberg drummer. Unfortunately, he was quickly dispatched by the cruel elf who eyes glinted as he sliced the poor young pup. There is something really off about this guy... I only hope I do not suffer the same fate! 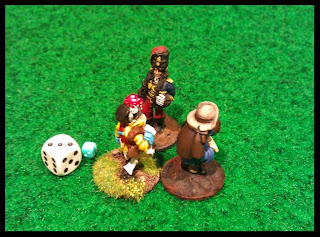 Cpt. Couteau swoops in and snatches Herr Heulen from the unsuspecting drummer... nasty! 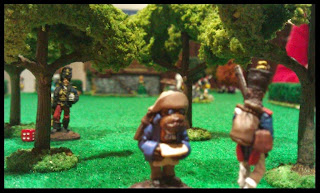 He who fights and runs away... the Ferach grudgingly make their escape through the trees and back to camp...
but not empty-handed!

And so, dear cousin, here I sit in solitude, awaiting my fate! Who knows where my adventures will take me, and what thrilling tales I will have for you when next I write! Farewell!

And that wraps up our first "full-sized" Flintloque battle! The Schnöselberg troops held the well as, quite simply, there were too many casualties on the Ferach side to do much more than grab Herr Heulen and make a quick exit (and it was quite late in the evening when we finished up anyway). While most of my section survived to do battle another day, they had many injuries so I'll be interested to see how they fare next time. I'll definitely stay out of the line of fire of that deadly jaeger!

Hope you enjoyed it! Of course a few more things happened in the game that Fritz didn't account for... including the cowardly Heißhund emerging at the very end of the battle to catch the pig! 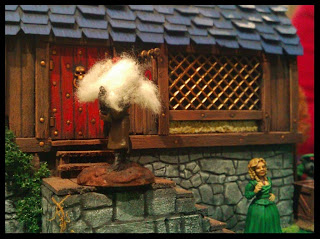 The Innkeeper kicks open the door and opens fire... I lost two of my elves that way! 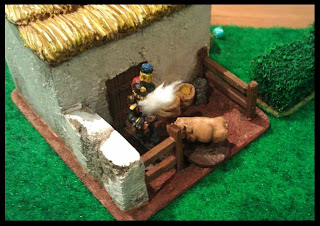 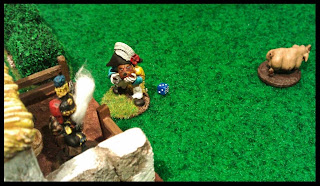 The pig was tricky to catch, and almost overwhelmed my Volitgeur.
Posted by Christian at 6:04 PM

Email ThisBlogThis!Share to TwitterShare to FacebookShare to Pinterest
Labels: Flintloque